Lorenzo on pole as Stoner struggles

Lorenzo on pole as Stoner struggles 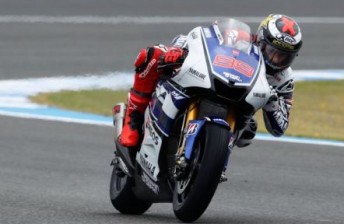 Jorge Lorenzo and Dani Pedrosa will start the Spanish Grand Prix from first and second on the grid respectively after a strong qualifying session for the local heroes.

Lorenzo’s best time of 1m39.532s came on his penultimate lap of the 60 minute session, which was held on a drying Jerez circuit.

Pedrosa managed to lap within 0.14s of the opening round winner, while Nicky Hayden was a further 0.9s adrift in third.

Cal Crutchlow and Casey Stoner completed the top five, with the Australian left to lament the lack of dry running prior to the qualifying session.

Valentino Rossi continued to struggle with the Ducati GP12 – the Italian managing just 13th on the grid, some 2.4s slower than team-mate Hayden.

Colin Edwards will start from the rear of the grid after a falling off his Suter CRT entry mid-session.