Sebastien Loeb on target in Argentina

Sebastien Loeb on target in Argentina 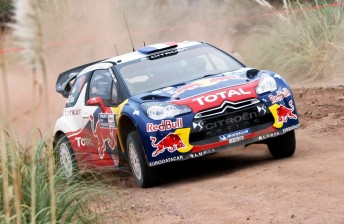 Segastien Loeb at the head of the field at Rally Argentina

With one day remaining Sebastien Loeb is in the box seat to score his seventh Rally Argentina title and 70th overall win in the FIA World Rally Championship.

Team-mate Mikko Hirvonen has been told to hold position in second place, after the Citroen duo built a healthy margin over third placed Dani Sordo in a Ford.

In front of Loeb is 132.19 competitive kilometres, including the mammoth 65.74-kilometre Matadero/Ambul stage.

Hirvonen was firmly in contention for top spot on the back of two stage wins in the morning until Citroen team chief Yves Matton gave the order for the Finn to remain behind his French colleague in order to secure a one-two finish.

“It has been a very strong day,” said Loeb.

“Mikko did some very good times in the morning but in the afternoon I took it a bit more easy but it was still very fast and the car was working well. It’s looking good at the moment.”

Although disappointed to have the fight called off, Hirvonen accepted his team’s decision.

“For sure you want to fight all the way through but you have to think about the bigger picture and the manufacturers’ points,” said Hirvonen.

“We’ve had a great day no doubt about it and we’re in a good position for the team. Anything can happen but we can take it quite steady and not push so hard.”

Ford stand-in Sordo started day two in touching distance of the leading Citroen duo but gradually fell back, unsettled by a puncture and running a mixture of hard and soft compound tyres in the morning.

“I don’t have a lot of confidence today. It’s really bad to be honest. I’m getting points, they’re important but I want to go fast too.”

Mads Ostberg is on course for another solid haul of points in his Adapta Fiesta following a trouble-free day with Martin Prokop capitalising on Nasser Al-Attiyah’s retirement with broken suspension to take fifth overall.

After re-starting under Rally 2 regulations, Ford Factory driver Petter Solberg set the fastest time on all three of Saturday afternoon’s stages in his bid to recover the time he lost when he retired on stage four with broken steering.