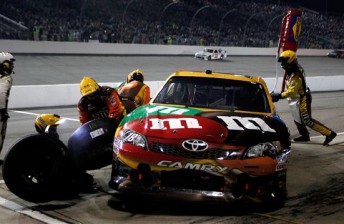 Kyle Busch has backed-up victory as an owner in the Nationwide Series race at Richmond, with a win as a driver in the Capital City 400 presented by Virginia is for Lovers Sprint Cup race.

The win was his first of 2012 in NASCAR’s premier racing series and broke a 22-race winless streak.

After watching his brother Kurt steer his team’s car to victory lane on Friday night, Kyle Busch made the most of a late race re-start to jump Tony Stewart, who appeared headed for victory.

Stewart was left fuming after claiming the caution for debris was little more a than plastic soft drink bottle. With all the leaders coming to the pits with 13 laps left to run for fresh tyres, Busch beat him out of the pits and then streaked away at the re-start to lead home Dale Earnhardt Jr and Stewart across the finish line.

Carl Edwards was another one questioning the officials after he was black flagged for jumping the restart with 81 laps remaining.

Edwards lined up next to Stewart for the restart, and his spotter told him that he was the leader. But NASCAR ruled Stewart was the leader, so when Edwards sailed past him on the restart he was given the black flag and a drive-through penalty.

A tough evening for Australia’s Marcos Ambrose who battled to find the balance of his car to finish 22nd.

RESULTS : Capital City 400 presented by Virginia is for Lovers