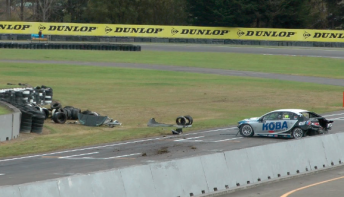 Race 2 of Round 3 of the 2012 V8 SuperTourers Series at Manfeild Raceway has been red flagged after a major incident involving the Racing Projects Ford of Colin Corkery.

Corkery was able to walk away from the crash, which saw the Sydney resident spin into the infield tyre barrier following a touch from Andre Heimgartner.

Corkery’s car spun across the grass before making heavy rear and right-side contact with the wall.

It is expected that the race will be restarted once the tyre barrier is repaired.

Race 1 winner Jonny Reid was leading the field at the time of the incident, which occurred on Lap 17 of 25.

The race had already been punctuated by a Safety Car period – caused by a spin from fifth placed Ant Pedersen at Turn 1 on Lap 3.

Reid had led the race from the outset, holding a one second gap over Murphy, who benefitted from an early mistake  by McIntyre that saw the JMR Falcon run wide at Turn 1 on Lap 3.

McIntyre lost further ground with an off at Turn 6 just two laps prior to the red flag.

Eddie Bell also endured drama, with the Independent Fisheries Ford spun by Booth at Turn 1 after running as high as third in the opening laps.

Bell’s stationary Falcon was subsequently clipped by Paul Manuell’s Orix Commdore, sending both cars to the pitlane for repairs.

Another to lament Turn 1 was Kayne Scott, who ran last for much of the 17 laps after spinning at the right-hander.