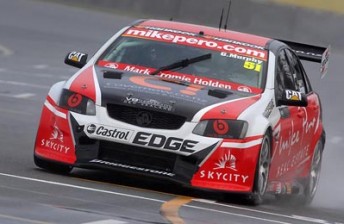 Greg Murphy has fought off a determined John McIntyre to win the third and final race for the V8 SuperTourers Series round at Manfeild.

Starting on the outside of the front-row following third place finishes in the opening two races of the weekend, Murphy was able to hang on around the outside of pole-sitter Jonny Reid at the first corner, before eventually taking the lead at Turn 3.

The race was one of tyre conservation thereafter, with the entire field having started on wet tyres following a shower between races

McIntyre passed Reid and early fast-man Andy Knight in the opening seven laps, but found himself in excess of 6s adrift of Murphy by the race’s halfway point.

The JMR Falcon came alive in the closing however, with the final margin standing at 0.2s after McIntyre closed by a second a lap over the last four tours.

Richard Moore stormed his way through from 10th on the grid to finish on the tail of the leading trio in third, while Reid, Steven Richards, Kayne Scott, Craig Baird, Ant Pedersen and Knight rounded out the top 10.

Andy Booth was the only driver to pit for slicks during the race, with the Woodstock Holden finishing 12th after losing a lap in the changeover process.

Booth ended the race with the fastest lap for his troubles – a 1:09.75s effort 2.4s quicker than the Murphy’s best.

The Race 3 result was enough to ensure that Reid took the overall round victory. The International Motorsport driver leads the points standings from fellow Ford driver McIntyre after three rounds.

Series points after Round 3