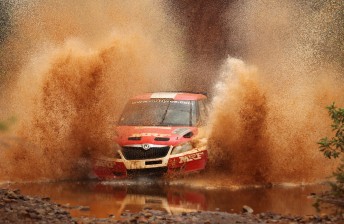 After dominating the opening leg, team-mates Chris Atkinson and Stephane Prevot had to settle for second after an electrical problem saw the pair lose over six minutes on the event’s 15th stage this morning.

“We lost heaps of time on SS15 stopping twice after the car just died with an electrical issue,” Atkinson told Speedcafe.com.

“It’s been a very wet rally which created several deep water crossings and water got into the electrics of the car.

“The remaining stages today weren’t an issue in terms of water so it’s a shame we couldn’t produce the overall win but it’s great Gaurav and Glenn could pick up their first win for the year and make it two-from-two for the MRF Tyres Skoda team.”

Weather played its part, heavily throughout the event with hot sunny skies turning to tropical down-pours in the afternoon causing several punctures and mechanical issues amongst the field.

The winner of today’s leg was 2011 Champion Alastair McRae who re-entered this morning after retiring from Leg 1 on Friday. The Scotsman picked up seven valuable Championship points with three of six stage wins.

Unfortunately for McRae’s Proton Motorsports teammate and Championship hopeful PG Andersson, his day was cut very short when a mechanical failure on the opening stage of the morning forced him out of the rally, putting a dent in his chase for the Championship.