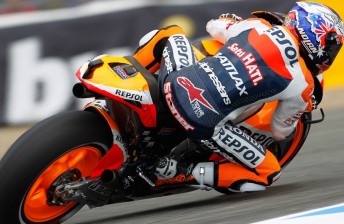 Casey Stoner has won his first MotoGP of the year winning the Spanish Grand Prix at Jerez in a race he has called one of the greatest of his career.

The victory is the Australian’s first win at the Jerez circuit and 34th of his career and he is just four points behind Jorge Lorenzo in the championship chase.

Stoner was forced to work for his victory at both ends of the race. Starting fifth, the two-time world champion was involved in a fantastic battle with a large group of riders off the start. He passed Pedrosa on the third lap and cleared out.

However, his lead disappeared with nine laps to run as Lorenzo applied plenty of pressure. Three laps from the end the Spaniard looked set for a pass on the final corner, but Stoner held him out and then put a small gap on the Yamaha rider through to the finish.

“Hats off to the team as they turned it around for me today and it was probably one of the greatest races of my career,” said Stoner.

“We were definitely struggling with the set-up and had to find something for the race today.

“The warm-up was wet and we decided to skip that and gamble on the changes we made would be good in what we hoped would be dry conditions for the race.

“We lost a little bit of grip in the rear, but we got a lot better feeling in the front. For me that is what this track is mainly about, getting that front through the turns and it was a really fantastic race for us.”