Loeb fights to the front in Argentina

Loeb fights to the front in Argentina 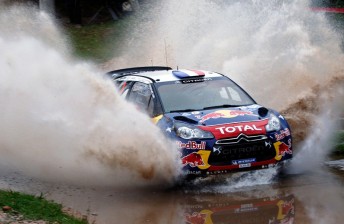 Sebastien Loeb on the charge in Argentina

Sebastien Loeb holds a narrow lead over Citroen team-mate Mikko Hirvonen at the end of the opening leg of the Rally Argentina.

Loeb reversed a deficit of more than half a minute as Ford driver Petter Solberg had his hopes end with a broken steering arm late in the day.

After struggling through the morning stages, which included a spin, Loeb called for set-up changes at the midday service and he attacked in the afternoon.

The Frenchman moved to second place when Solberg stopped on stage four and snatched top spot by going faster than Hirvonen on the fifth test. Then the Finn took the final stage of the day to be just 0.1s behind the rally legend.

“We changed a bit of the set-up and I was much more confident in the afternoon,” said Loeb.

“I pushed really hard and there were no mistakes. It is very close with Mikko and there is a long way to go.”

Solberg was 5.4 kilometres from the end of stage four when he was forced out having begun the afternoon loop leading by more than 20s in his Fiesta RS WRC. The Norwegian will return under Rally 2 rules on Saturday.

Stand-in team-mate Dani Sordo impressed on his debut for the Blue Oval by posting a succession of top five stage times. He is third overnight, 33.1s behind Loeb after losing ground running a hard compound tyre on the damp final stage.

Mads Ostberg is fourth after six stages despite a power issue on stage four and an intercom glitch on stage five. Thierry Neuville was fourth starting stage five but an off left his Citroen with extensive right-rear damage. The promising Belgian plans to restart on Saturday.

It was a frustrating day too for M-Sport Fiesta drivers Evgeny Novikov and Ott Tanak. Novikov retired with a broken wheel on stage three. Tanak suffered a puncture on stage two and then had to change a broken steering arm on stage three, before going off on stage four and getting stranded in a ditch.

Andreas Mikkelsen is an impressive seventh in his Super 2000-specifciation Skoda Fabia despite losing time with a broken front-right damper on stage five. He heads Volkswagen Motorsport team-mate Sebastien Ogier by 22.8s after the Frenchman was slowed by a puncture on stage four.