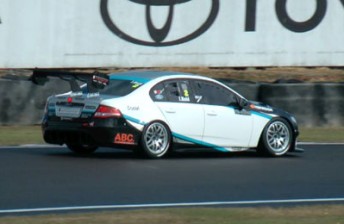 Jonny Reid has taken pole position for Round 3 of the 2012 V8 SuperTourers Series in a thrilling qualifying session at Manfeild Raceway.

The International Motorsport Ford driver set the fastest time of 1:11.44s after the chequered flag fell.

Paul Manuell will start second after an early pair of quick laps saw the Orix Commodore at the top of the order for almost 25 of the session’s 30 minutes.

The session had started in wet but sunny conditions following a morning of intermittent showers.

The field started on wet tyres, before Baird led the charge to slicks as the halfway mark approached.

The dry rubber proved a difficult proposition however, with a flurry of quick times not coming until the final five minutes.

Scott was the biggest improver in the closing stages, with the Peak Oil Holden having sat out the initial wet running before coming within 0.6s of the final pole time during its stint on the slicks.

The first of three races for the weekend is scheduled to kick-off at 15:30 local time.

The V8 SuperTourer field has been reduced to 14 cars this weekend following the withdrawal of the two Supercheap Auto Racing Commodores this morning.

CLICK HERE for Speedcafe.com’s earlier story on the team’s withdrawal