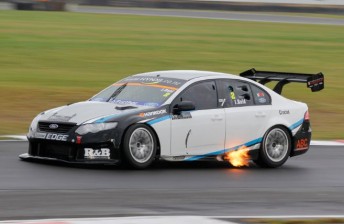 International Motorsport Ford driver Jonny Reid has taken a lights-to-flag victory in the opening race of the third round of the 2012 V8 SuperTourers Series at Manfeild.

Reid held the inside line into the first corner to maintain the top spot from fellow front-row starter Paul Manuell.

Third place qualifier Greg Murphy moved to second on the opening lap but proved unable to do anything about Reid.

CLICK HERE for a video with Jonny Reid after the race

John McIntyre eventually beat Murphy into second place – the JMR Ford having climbed from sixth on the grid to second within the first half of the 20 lap contest.

While Reid’s margin grew to more than 3s midrace, McIntyre pushed hard until the end, eventually cutting the gap to just 1.1s.

Ant Pedersen was on the charge, with the Hampton Downs race winner gaining eight places following a difficult qualifying session to take fourth. 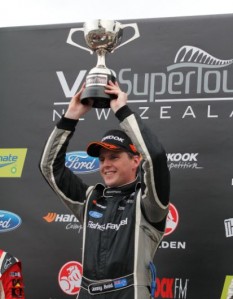 Jonny Reid on the podium. PIC: Andrew Brunton for www.sportsimages.co.nz

Andy Booth was the race’s only retirement, with the Woodstock Holden pulling off on the back straight after spending the first eight laps at the back of the 14 car field. The team later discovered that a flailing windscreen wiper mechanism had tripped the car’s ‘kill switch’.

The track remained largely dry for the entire 20 laps, despite light sprinkles of rain that saw several drivers run with their windscreen wipers on.

Several puddles on the circuit ensured tricky conditions for the drivers regardless, with Reid and Manuell both spinning on the way to the grid.

A further two races will be held at the Manfeild circuit tomorrow.