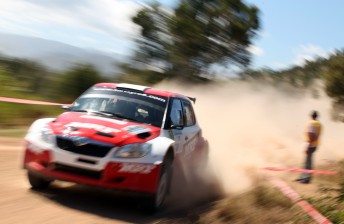 Australian rally star Chris Atkinson has won the opening leg of Rallye de Nouvelle Caledonie, Round 2 of the Asia Pacific Rally Championship, after a dominant performance by the MRF Skoda driver today.

With the event points system working over a two-leg system, Atkinson has increased his lead in the Championship standings but will be looking to claim the overall rally win for a second year running, with another strong performance tomorrow.

“It’s great to win today’s leg and increase our lead in the championship,” said Atkisnon.

“We’ll still be pushing hard to win tomorrow’s leg and gain maximum Championship points but it’s going to be a big fight with both PG and Alistair [McRae] back with fully repaired cars.”

Overall, ‘Atko’ holds a 41.4s lead over MRF Skoda teammate Gaurav Gill who put in another fine display behind the wheel of his Fabia S2000, which included an impressive five stage wins.

Overnight leader PG Andersson continued his close battle with Atkinson over the morning loop of stages before losing minutes to the leaders on the remaining five stages of today’s action.

Andersson struggled with a lack power and lost over 14 minutes. It is suspected by the Proton Motorsports team that the engine damage was caused by water from the many crossings on today’s stages.

The demise of the Proton promoted 66-year-old Kiwi driver Brian Green to third overall with Andersson limping home forth in the APRC standings.