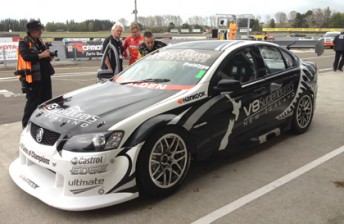 Although completing just a handful of laps, Perkins said he enjoyed the experience.

“The category invited me to come and drive the prototype car here at Manfeild, and it’s been great to sample it for the first time,” Perkins told Speedcafe.com.

“I’ve never been to this track before either, so it was good fun. It was actually the first time I’ve been in a race car all year and it was bloody ace to get back behind the wheel.

“Sharing the car with a couple of other guys means I was never going to get a heap of laps, but any laps are good laps and it was good fun.

“Learning a new car and a new track at the same day can be quite difficult, so I was driving well within the limits.” Perkins and V8 SuperTourer regular Scott McLaughlin are the only two drivers to have turned laps in both V8 Supercars’ Car of the Fututure prototype and one of the New Zealand cars.

According to Perkins the two Pace Innovations built cars have a similar feel, despite the Kiwi version featuring a variety of cost-saving measures including a control 7.0 litre Chevrolet engine, a traditionally-mounted gearbox and a three-link live rear end.

“They’re very similar in a way – the cars are different on paper but the driveability is similar,” said Perkins.

“I can’t really fault either of them to be honest. I know the Kiwis have really put an emphasis on cost containment, but V8 Supercars didn’t really need to do that in the same way – every (V8 Supercars) team has an engine shop for example that didn’t need to put a heap of people out of work.”

“If I can do the enduros back home, which I’m doing with Garry Rogers in the Fujitsu team, and then come and drive with one of the competitive teams here, it’s about all you can ask for as a part-time racer,” said Perkins.

“That’d give me four or five races for the year, which would be a great thing.”

Round 3 of the V8 SuperTourers Series takes place at Manfeild this weekend, with today’s practice sessions preceding qualifying and Race 1 tomorrow.