Andrew Jones on Trac for WA Dunlop round

Andrew Jones on Trac for WA Dunlop round 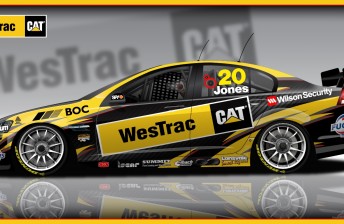 How Andrew Jones' car will look in Perth

The 2004 Development Series Champion will be adorned in the yellow, black and white of the heavy industry giant.

WesTrac CAT has been a long time supporter of Brad Jones Racing and the company has interests with other V8 Supercar teams, including Ford Performance Racing and its drivers – Mark Winterbottom in the #5 Orrcon Steel FPR Falcon and Will Davison in the #6 Tradingpost FPR Falcon.

The major signage on the Jones mobile is for one-round only and WesTrac CAT will utilise the opportunity to have a presence in the Dunlop V8 Supercar Series as an additional anchor point for the many corporate guests it takes to the Tradingpost Perth Challenge.

Jones himself will have a busy weekend without taking racing or corporate commitments into account – he will also be present in Perth in his role as Driving Standards Observer for the V8 Utes.