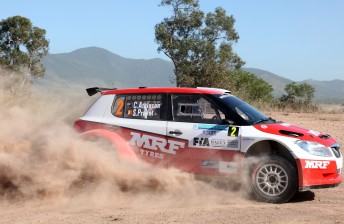 Aussie Atkinson is in a tight battle with Swede Andersson

Andersson took control of the lead from the opening 16.78km Gadji 1 test but was never out of sight of Gold Coaster Atkinson who finished tonight’s super special stage just 3.3s behind in the overall classification.

“We always knew it would be close, but its going to be a long and tough rally,” Atkinson told speedcafe.com.

“PG is driving really well and putting up a great fight already so I’m looking forward to an exciting weekend and taking the fight to him.”

Atkinson’s MRF Tyres Skoda teammate Gaurav Gill dropped over a minute with a puncture on stage 2 but fought back with a vengeance producing two stage wins in the afternoon to sit in third position albeit over a minute behind the leading pair. 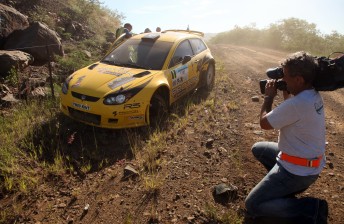 Scotsman Alister McRae picked up a puncture on the same stage only to see his rally abruptly end four kilometres from the finish-line after driving on the rim, which caused the suspension in his Proton to collapse.

With Leg 1 combining Friday and Saturday’s stages, McRae will have to spectate tomorrow’s action before returning for Leg 2 on Sunday under SuperRally regulations.

“We can restart but not until Sunday,” said a very disappointed McRae as he surveyed the damage.

Tomorrow will be the longest competitive day of Rally New Caledonia  for 2012 with 129,78km of stage action to be contested.