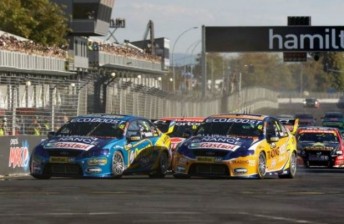 They look the same on the outside, but FPR's #5 and #6 Falcons have run in different configurations recently

Ford Performance Racing team principal Tim Edwards says the factory Ford squad has made encouraging steps towards overcoming a unique challenge facing it under 2013’s Car of the Future regulations.

While the rules for the new-generation cars have been shaped to enable teams to carry over their current front suspension and steering systems, the COTF’s engine position (15mm lower and 100mm further back than today’s cars) has forced FPR to completely redesign the front of its Fords.

Unlike the remainder of the V8 Supercars field, the FPR Falcons feature a steering rack that sits ahead of the front-axle centre line, which is commonly referred to as a ‘front-steer’ system.

In a bid to minimise the workload when its first COTF chassis hits the track for testing, the team has run a ‘rear-steer’ front-end in Mark Winterbottom’s car since Albert Park.

Although the COTF’s front suspension regulations will not be completely finalised until after the brake package has been ratified, Edwards says he’s happy with the progress that his team has made on the changes so far.

“We’re in a bit of a unique situation,” Edwards told Speedcafe.com of the need for the redesign.

“We can just back the truck up at a tip on the sixth of December (after the 2012 season finishes) and empty it, because there’s nothing in our current cars that fit the new rules.

“We could have jumped up and down and threw the toys out of the pram, but instead we’re just getting on with it.

“The encouraging thing for us is that this year our cars have been very close (despite running the different configurations), so it’s great that we’ve been able to make such a wholesale change to the front of one car without compromising its performance.”

Edwards added that the team is unlikely to phase in the new front-end design onto its other cars this season, and may in fact eventually revert Winterbottom’s car back to the old system pending the “consumption rate” of the new components.

Construction of FPR’s first COTF chassis, meanwhile, continues at its Melbourne workshop, where the team has added its own front and rear structures to the centre section (front fire-wall to main hoop) delivered by Pace Innovations last month.

Edwards is optimistic of running a car at V8 Supercars’ first official COTF test at Queensland Raceway on August 6, despite growing concern over the supply of control items such as the fuel tanks, wheels and brake package.

“At the moment we believe we’ll be at the test unless something comes out of the woodwork that we don’t know about at the moment,” said Edwards.

“All of the control components suppliers know when they’ve got to have the parts here, and clearly if they have an issue then that’s out of our hands.

“There’s a lot of hard work to come and a lot of unanswered questions at the moment, but everyday we’re getting more answers and hopefully in the next month or two we’ll have all the answers and a greater visibility as to the supply of parts. But at the moment we’re optimistic we’ll be at the test.”

It is not yet clear how many chassis FPR will build before the start of the 2013 season as the squad is yet to lock away any customer deals.