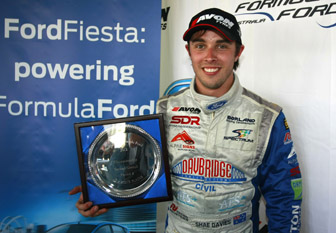 Australian Formula Ford driver Shae Davies will make his international racing debut later this year when he competes in three rounds of the F1600 Formula F Championship Series in the United States.

Davies, currently fourth in the Formula Ford standings after scoring his maiden national level race win at the last round in Tasmania, will head to the USA to drive a Spectrum-Honda for Cape Motorsports with Wayne Taylor Racing, the North American distributor of Spectrum Racing Cars.

The 22-year-old will partner 17-year old Finnish driver Matias Köykkä, who recently won the opening event of the season at Virginia International Raceway.

The scheduling of the F1600 Formula F calendar means that each US trip will be twinned on back-to-back weekends with rounds of his Australian Formula Ford campaign, kicking off on June 28-July 1 at New Jersey Motorsport Park in Thunderbolt, a week before the Townsville street race.

The Gold Coast-based Davies will then head back to the USA to race at the famous Mid-Ohio Sports Car Course on July 26-29, before returning to Australia to compete at Queensland Raceway on the first weekend in August.

Davies’ final F1600 Formula F event will take place on October 12-14 at the iconic Watkins Glen circuit in New York, just one week after competing at Bathurst – the penultimate AFFC round supporting the Supercheap Auto Bathurst 1000.

The opportunity for Davies to race in the USA is one that he relishes.

“There will be so much to learn and take away from the experience – new circuits, a new team, new car and a different motorsport culture. It will also be the first time I’ve raced a car on slick tyres, so it can only be a great developmental experience for my driving and career plans. At the same time, I want to be competitive and race at the front, so I will be logging plenty of laps of the US circuits in my Hyper Stimulator over the coming months.

“To race at Bathurst on one weekend in October and then Watkins Glen the next will be pretty special – there aren’t many drivers who get to race on two of the world’s best road courses in one week so I am definitely grateful for the opportunity Cape Motorsports with Wayne Taylor Racing have given me, and of course the assistance that Borland Racing Developments have provided in making this happen.”

Davies is also second in the Spectrum Driver to USA Challenge, an incentive which will award the highest-placed Spectrum driver in this year’s AFFC with a US F2000 test drive for Cape Motorsports with Wayne Taylor Racing. Synergy Motorsport driver Mathew Hart currently leads the award by 47 points over Davies, Liam Sager and Sam Power.

The next round for F1600 Formula F takes place at Lime Rock Park, Connecticut on May 25-26.