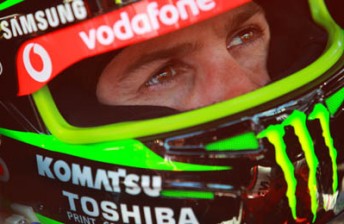 V8 Supercars’ Car of the Future prototypes will have two new test drivers when the cars hit the track for brake testing at the end of next month.

Following the recent completion of the tyre testing program undertaken by Mark Winterbottom and Rick Kelly, TeamVodafone and Stone Brothers Racing have both been asked to supply a driver for the brake running.

TeamVodafone has nominated Jamie Whincup to take part, while SBR’s decision will rest on whether or not Shane van Gisbergen can fit into the prototype cars.

The brake evaluation is set to take place at Queensland Raceway in the week following the Phillip Island event (May 18-20), and could be completed in as little as one day.

As revealed by Speedcafe.com last month, the key parameters of the new AP Racing supplied control brake package have largely been locked down, leaving on-track thermal efficiency evaluation as the main task yet to be undertaken.

CLICK HERE for Speedcafe.com’s previous story on the brake package.

SBR co-owner Ross Stone confirmed to Speedcafe.com that the final decision on his team’s nominated test driver is yet to be made.

It was discovered at the teams’ first prototype inspection session mid last year that several of the current drivers would not be able to fit in the two cars, which had their engines moved back 100mm partway through the build process.

“I’ve asked them (V8 Supercars) if we can have a crack at seeing if we can fit Shane in,” Stone told Speedcafe.com.

“Normally you can’t go and look at them unless you’ve been invited, but they’ve approved us to do that so we’ll see if Shane fits. If not then Tim (Slade) or Lee (Holdsworth) will be fine.”

The brake test will mark the first time that either of TeamVodafone’s drivers have sat behind the wheel of the prototype cars, which feature Triple Eight front suspension in addition to the COTF’s control Triple Eight designed rear suspension and pedal box.

While the layout of the cars arguably makes Whincup the perfect driver to complete the brake evaluation, TeamVodafone team manager Adrian Burgess says his team is unlikely to learn a great deal from the three-time champion’s feedback.

“We’re not really there for our benefit, we’re there do to a job for V8 Supercars,” Burgess told Speedcafe.com.

“It’ll be interesting for Jamie, but let’s not kid ourselves, they’re prototypes – it’s not as if he’s getting a run in a fully-prepared Triple Eight 2013 race car.

“We take our responsibilities to the category seriously, and we need to help make sure that we’re all going to go racing on a good package.”

Completion of the brake testing will leave aerodynamic parity evaluation as the last major on-track task for the prototype cars.

Speedcafe.com understands that Nissan and Kelly Racing are pushing for wind tunnel testing to be completed in the United States, although cost considerations could see a continuation of V8 Supercars’ recent open-air practices.

The final decision on the 2013 tyre package, however, has now been made, with V8 Supercars electing against introducing a more aggressive soft compound option.

Although the decision means that the COTF tyres maintain the current hard and soft compounds, the increased size and revised construction are likely to make a significant difference to the effectiveness of the overall package.