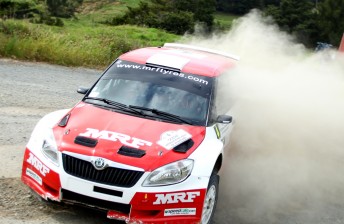 Atkinson currently leads the 2012 APRC after round 1

Round 2 of the FIA Asia Pacific Rally Championship kicks off this weekend as crews head to the south pacific for Rallye de Nouvelle Caledonie.

With the championship lead in both the Drivers’ and Manufacturers’ standings and Atkinson the reigning rally winner from 2011, Team MRF Skoda will start this year’s event as favourites.

“We had an awesome start to the season in New Zealand and the team and the car worked perfectly,” Atkinson said.

“Straight out of the box the Skoda was great, but we also learnt a lot about the car over the two days of the event and that will stand us in good stead in New Caledonia this weekend.” 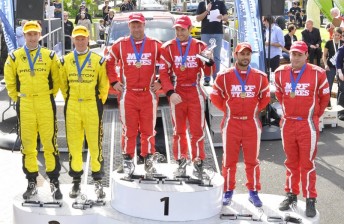 Challenging Atkinson to overall victory will be his former Proton Motorsports team and Swedish driver PG Andersson who showed impressive speed on the Rally of Whangarei in March.

Andersson sits just seven points behind Atkinson in the championship standings but will be at a disadvantage this weekend as he competes on the island-based rally for the first time in his career.

“I have never been to this rally before, so it’s always exciting to try some new roads,” commented Andersson.

Atkinson won last year’s New Caledonia event but will be hard pressed this year by Swede PG Andersson
“I have to be honest here and say that I wasn’t completely sure where New Caledonia was before I knew we would be starting this rally – now I know more about the place and the rally.”

The next two biggest challengers in the championship chase come in the form of Atkinson’s MRF Skoda teammate Guarav Gill and 2011 APRC Champion Alastair McRae in his Proton.

Based in Noumea on Grande Terre, the largest island in New Caledonia, the rally moves through the island’s beautiful lush vegetation and farming plains.

The event’s history has seen massive variations in changing weather conditions with the time of the year ripe for monsoonal downpours.

An uncontrollable element which can play havoc on teams tyre choice and consequently stage results.