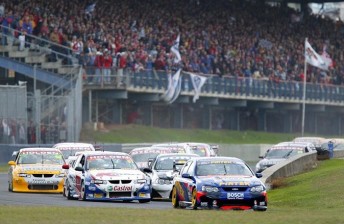 V8 Supercars says it will use this year’s Eastern Creek V8 Supercars event to assess whether the western Sydney venue deserves a permanent slot on the category’s calendar.

Eastern Creek has not hosted a V8 Supercars round in five years, but was yesterday confirmed as a late addition to the 2012 schedule amid the fallout from failing to secure an international event for its much discussed ‘TBA’ date.

CLICK HERE for yesterday’s news story on the calendar reshuffle

While describing the deal as a “one-off opportunity” for the circuit, V8 Supercars CEO David Malone has spoken bullishly on the category’s belief that the Sydney market can sustain a second event alongside the existing Homebush street race.

Malone confirmed that this year’s Eastern Creek meeting, set to take place on the August 24-26 weekend, will be used to assess the viability of allocating the western Sydney venue a position on future calendars.

“We want to go back out there and see how it works,” said Malone of Eastern Creek’s V8 Supercars future.

“It’s basically a one-off opportunity but we have an option to extend if we want to.

“We’re really out there because it fits into the calendar, (but we’ll) try it this year and see how it goes.”

Although establishing an event at Eastern Creek could prove beneficial to the category should the New South Wales government reconsider its support for the Sydney Telstra 500, Malone denied that such thinking was taken into account when adding the permanent venue to the 2012 calendar.

The category’s current contract with the NSW government to stage the Homebush race runs out at the end of next year.

The news of V8 Supercars’ calendar reshuffle was met with mixed reaction within the V8 Supercars paddock at the weekend, with the cost of running a 15th championship event without a substantial off-shore appearance fee not lost on the team owners.

“It’s an extra load absolutely, but we’ve just got to deal with it,” said Edwards of the cost.

“If we want to grow our fan base in Sydney, the more we can give them opportunities to come and see our cars the better.

“We race in other states multiple times and given the size of New South Wales, it’s perhaps surprising that we don’t race there more.

“This is probably just the first step in seeing that if we can actually grow this market.”

Eastern Creek has hosted 15 Australian Touring Car Championship/V8 Supercars Championship rounds since 1992, with the most recent event won by Will Davison.

The race format and support category line-up for this year’s event are yet to be sorted, although Malone confirmed that a twilight format is not on the agenda.