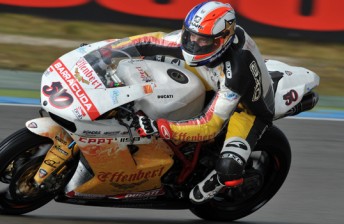 Sylvain Guintoli was the star at Assen

Sylvain Guintoli has been the star in mixed weather condition at the third event of the World Superbike Championship at Assen in Holland.

In an incredible first race, eventually run over nine fully wet laps, Guintoli from Team Effenbert – Liberty Ducat won his first ever race in the category. His margin of victory was 2.6 seconds, from a very determined rookie rider Davide Giugliano (Althea Racing Ducati) and his team-mate Carlos Checa.

Their fight for the podium places was just one of many highlights in the wet race. After the first part of the race was dry, it was halted when several leading riders fell as the rain came. By regulation a whole new race was declared and the only influence the first leg had was the finishing order determined grid places for the ‘real’ second race.

In the second race a great ride from Jonathan Rea (Honda World Superbike Team) saw him overcome the pain of a hand injury suffered earlier in the day to win his first race of the year. He also scored the first win for Honda in 2012.

Race one winner, Guintoli, was second after his team-mate Jakub Smrz dropped back from his long time race two lead after choosing a wet front tyre. Smrz eventually crashed while trying to pass a lapped rider.

The battle for third went to Laverty for his first podium of 2012.

Team-mate Biaggi is now leading the championship after finishing eighth in race two, one point ahead of Checa. The defending series champion gambled on rain tyres but as the track dried and the rain stayed away, he had to come change his tyres and he ended up 17th – out of the points. Tom Sykes (Kawasaki Racing Team) dropped back from a potential podium finish to go sixth, and stays third in the overall championship fight, 13 points from Biaggi.