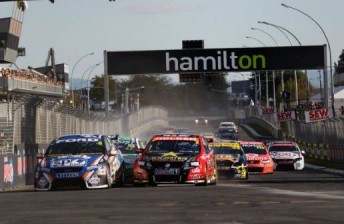 The V8 Supercars Championship’s future in New Zealand appears no closer to resolution with the category insisting it has multiple options still on the table.

Pukekohe Raceway is the firm favourite to host the series next year, with the category currently waiting on the outcome of a funding proposal put to the Auckland City Council that would see the 2.8km circuit receive the upgrades it requires.

Speculation that Hampton Downs remains an outside chance of securing a V8 Supercars date however refuses to subside.

Plans to extend the circuit to 3.8km continue to take shape, while the venue’s owners are understood to be working on a solution to its potentially prohibitive council-mandated spectator capacity limitations.

Speaking at the weekend’s Hamilton finale, V8 Supercars CEO David Malone stressed that there are multiple options still on the table for the V8 Supercars in New Zealand.

“I think it’s fair to say that there was one option coming at us, but there are a couple of options that have come up,” said Malone of the current situation.

“We’ve got an open mind and are talking to the various parties, but we’ve got to work through that process.

“Obviously this event (Hamilton) hasn’t been economic, unfortunately, but we’ve had 450,000 people through the event in the last five years, so clearly the New Zealand fans love the V8 Supercars.”

Mark Winterbottom yesterday took victory in the final race to be held on the Hamilton street circuit.

Winterbottom became the fourth and final driver to hold aloft the Mark Porter Trophy, which will now move to a permanent home in the Waikato Museum.