New winners in Newcastle for Stars of Karting

New winners in Newcastle for Stars of Karting 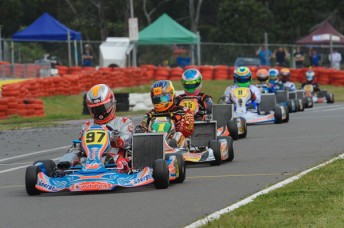 For the second time in as many rounds, there was new faces on top of the podium at the Castrol EDGE CIK Stars of Karting Series on the weekend.

Last round it was CRG driver Jake Coleman who broke through to claim his maiden round win. This time it was Vodafone-backed Energy Kart driver Chris Hays and Top Kart’s Cameron Hill who adorned the top step in the Pro Gearbox (KZ2) and Pro Junior (KF3) categories respectively.

Over the past ten rounds, Hays has been a front-runner, and despite winning more heat races than any other driver and he had never greeted the chequered flag first in second final – until yesterday.

Hays snared pole position in the top five shootout before shadowing Kyle Ensbey during the three heat races and opening final. He then put in a dominating performance in the 25-lap main event.

The Gold Coaster got the jump off the start line and after opening a handy buffer in the early laps, he was never challenged for the win.

“This has been a long time coming, I’ve been in a winning position a couple of rounds but have never been able to finish the job off for one reason or another. It’s really a huge relief,” said Hays.

“Until this weekend I wasn’t a real fan of the Newcastle track but after today, I love it.”

After failing to finish the opening final, Matthew Wall benefited from having fresher tyres and charged his way from the back of the field to finish within several kart lengths of Hays and claim the runner-up spot

Third place went to Ensbey, who now holds a 19-point buffer at the top of the standings in the chase for the John Pizarro Trophy. 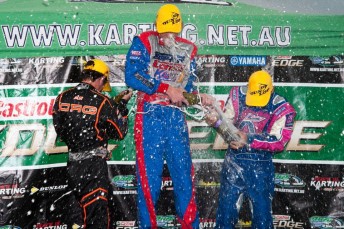 For Hill, he served his competitors with a notice that he will be a serious contender for the Jon Targett trophy with a strong victory in the junior ranks.

Hill crossed the line ahead of Coleman to move to within five points of the championship lead. For the second round in a row Kosmic Racing NSW driver Dimitri Agathos stood on the final step on the podium.

“It’s unbelievable, it feels great to finally get this monkey off my back and win a round,” said Hill.

When Pro Light (KF1) race leader Cian Fothergill came to a stop to a halt with a mechanical issue two laps from the end of the final, it handing the win the Joseph Mawson.

The Fujitsu Cool driver was one of the pacesetters all throughout the weekend with he and Fothergill holding a commanding buffer over the remainder of the field for the majority of the final race.

The next round of the five-round series will be contested at Ipswich in Queensland on June 16/17.

CHAMPIONSHIP POINTS
After Round 2 of 5