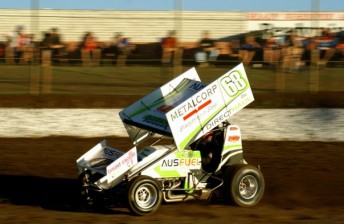 McFadden – deputising for Paul Morris aboard the Supercheap Auto J&J – led twice during the course of the event, the pair swapping the lead and dicing through traffic at will. In the early going, Gold Coast-based Northern Territorian, Danny Reidy slotted himself into the challenger’s spot – however his run ended when the front appeared to break on his car, forcing him to spin.

The final five laps saw Gessner and McFadden locked together – one choosing the highline the other the lowline and they carved their way through the traffic on the tight Archerfield bullring.

In the end, however it was Gessner that took the win and added the 2012 Queensland Title to his Trophy Cabinet.

In other Speedway news, the hotly anticipated battle between Michael Pickens and the returning Adam Clarke at Tyrepower Sydney Speedway has been placed on ice, with the Midget Trans Tasman Challenge A-Main unable to be run somewhat unbelievably due to the venue running too close to the council imposed curfew! Fans will have to wait until next weekend where they will see the 20 lap feature run, followed by the 50 lap Speedcar Classic.