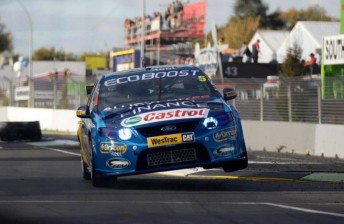 Mark Winterbottom has held off Jamie Whincup in a thrilling finish to win the final ITM400 Hamilton.

Whincup closed a 3s margin over the final 10 laps to challenge the Orrcon Ford – the two cars making contact on the first two corners of the last lap before Winterbottom edged away to win by 0.7s.

The victory is Winterbottom’s first of the season  and comes in his 250th V8 Supercars Championship race start.

Starting second on the grid, Winterbottom led pole-sitter Davison away at the start and was not headed outside of the pitstop cycles.

Davison ran second for the first half of the race before losing the place to a charging Whincup.

Repaired following its qualifying crash, the TeamVodafone Commodore dropped to seventh with a bad start before steadily moving back up through the field.

The race’s one and only Safety Car was called on Lap 18 due to debris from Garth Tander’s Holden Racing Team Commodore.

Tander clipped the Turn 6 apex tyre bundle while diving to the inside of D’Alberto as the pair battled for sixth place. Yesterday’s podium finisher eventually came home 26th after a lengthy stop for repairs.

Caruso’s team-mate Alexandre Premat was also in the wars – the Frenchman’s day including 23 kerb hopping infringements for a total of three drive-through penalties.

The Turn 4 chicane was also the downfall of Steve Owen, with a promising weekend for the VIP Petfoods Falcon ending with heavy contact against the exit wall on Lap 14.

The 2012 V8 Supercars Championship will continue in two weeks time with the Trading Post Perth Challenge at Barbagallo.