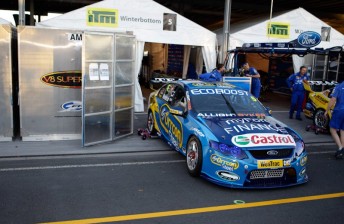 Mark Winterbottom has expressed his delight at becoming the last ever winner of a V8 Supercars Championship race on the streets of Hamilton.

The Orrcon Steel FPR Falcon driver scored his first win of the 2012 season after holding off a determined charge from Holden rival Jamie Whincup.

Winterbottom also reset the lap record during the race – a marker that will remain etched in the record books due to the event’s discontinuation.

Awarded to the winner of Sunday’s race in Hamilton since the event’s inception five years ago, the trophy is set to be put on permanent display in the Waikato Museum following today’s final race.

“The Mark Porter Trophy is a really special trophy,” said Winterbottom after his victory.

“It’s obviously nice to finish the last time here with a win, and to get the lap record as well I’ve had a pretty special day.

“A win anywhere is fantastic, but particularly when you’re the last one to win it… it’s pretty special.”

Winterbottom jumped to the lead off the start of the 59 lap race and was only headed during the pitstop cycles thereafter.

The 30-year-old found himself in a thrilling late-race battle with Whincup however as he struggled with tyre life in the final stint.

“I was just trying to get to the end really – I knew it was going to be on,” said Winterbottom of his thoughts during the battle.

“The Commodore (David Wall, running a lap down) didn’t do me any favours about two laps earlier. Wall made me pass him up the inside – I had about a 1.5s buffer and I thought he’d block Jamie but he moved out of the way and that got the gap real close.

“So I had to try and survive with about three to go. He definitely had better tyres at the end than I had, so it was about going in slow and getting out fast to make sure he didn’t have a run.

“Into (Turn) 1 he got close but I got as far right as I could, pulled first gear and tried to get out. I did the same at Turn 2.

“I kept a kerb strike until the end to just go as fast as I could through the chicane – that probably helped hold on as well.

“He was driving pretty on the edge and that’s what it’s about. You try and do everything you can to win it. I know he’s aggressive so I had to be aggressive and try and hold on.”