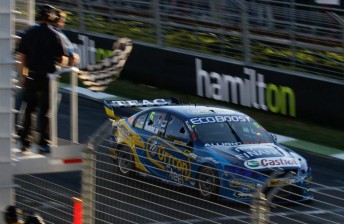 V8 Supercars has apologised for a technical issue that spoiled the result of a thrilling final ITM400 Hamilton race for thousands of television viewers.

The Network Seven broadcast switched to a commercial break when the feed from New Zealand dropped out with two laps remaining.

The coverage returned to the site of Mark Winterbottom performing a victory burnout.

The last two laps were then replayed with past-tense commentary following an explanation that there had been a technical issue.

The turn of events sparked an instant barrage of criticism from fans on social networking websites.

V8 Supercars subsequently posted a statement to its Facebook page apologising for the issue.

“The technical issue from the last two laps was due to a satellite uplink failure out of New Zealand,” read the statement.

“We sincerely apologise for this.”