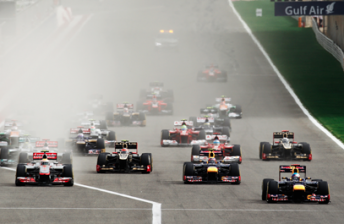 Sebastian Vettel has won his first rand Prix of 2012, winning at the Sakhir circuit in Bahrain.

The reigning world champion led from start to finish, fending off a late challenge from Lotus’ Kimi Raikkonen to take the win.

Raikkonen scored his first podium since his return to the sport this year, leading home his Lotus team-mate Romain Grosjean.

The Lotus pair proved extremely fast during the race, carving their way through the field after qualifying fifth (Grosjean) and 11th (Raikkonen).

Raikkonen benefited from not competing in the final qualifying session and used that speed to pass Grosjean on Lap 24. He made one faint attempt at Vettel’s lead, but ultimately settled for second.

Vettel’s win moves him into the championship lead and makes him the fourth different winner from the four races so far this season.

Australian Mark Webber finished a lonely fourth – the fourth time he has finished fourth this year! His consistency sees him sit third in the championship, just five points behind leader Vettel.

Nico Rosberg was fifth after an eventful race. He was involved in two incidents at the same point of the circuit when he was seen to move aggressively across on rivals Lewis Hamilton and Fernando Alonso. Both incidents are being reviewed by the stewards.

Force India’s Paul di Resta finished a fine sixth ahead of a fast-starting Alonso, Hamilton, Felipe Massa and Michael Schumacher, who started the race in 22nd.

Hamilton had an eventful race. After qualifying second, a glitch on his left rear wheel during his first two pit stops costing him valuable time.

Hamilton’s race at least gave him points, as his team-mate left with zero. Jenson Button ran on the fringe of the top five but copped a flat tyre in the closing stages. Worse was to come, though, as he withdrew from the race on the penultimate lap with an engine drama.

Australian Daniel Ricciardo had a shocking race. After qualifying a career-best sixth, a slow start saw him drop to 16th on the first lap. He pitted early with a damaged front wing, eventually finishing a lap down in 15th.

The next round of the Formula 1 World Championship is the first of the European events at Barcelona for the Spanish Grand Prix.