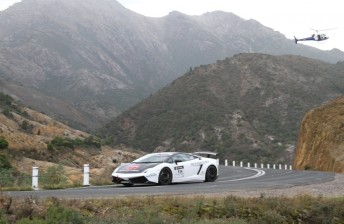 The win has given White and co-driver – uncle John White – a clean sweep of the CAMS Australian Targa Championship, the pair having already won Targa High Country in Victoria and Targa Wrest Point earlier this series.

White had electrical problems early on the run from Strahan to Queenstown, losing 30 seconds and creating some drama on the final morning. But with that problem fixed he charged across the event’s longest stage, the 51km Mt Arrowsmith, to take 50 seconds from his rivals and re-establish his buffer.

It was then a matter of nursing his Lamborghini home across the final three stages to the finish two minutes and 27 seconds clear of 2011 winner, Tony Quinn, in his Nissan GT-R.

Eight-time Targa Tasmania winner, Jim Richards, was back on the podium in third, a reward for setting consistent times in his Porsche 911 GT2 RS and the retirement of Brendan Reeves in the Mazda RX-8 SP with mechanical issues on the final morning.

Classic Outright leader Rex Broadbent survived a scare on Mt Arrowsmith as well when he finished up in a gutter. Fortunately, his co-driver, Chris Randell, was able to push him back onto the road, minimising the time loss to a minute.

But in the end the Targa veteran cruised to victory in Classic Outright, his 1974 Porsche 911 Carrera securing a sixth straight title having led the field across the entire five days of competition.

Second was Jon Siddins in his 1970 Datsun 240Z, who put up a dogged fight with Broadbent, finishing just one minute, two seconds behind. 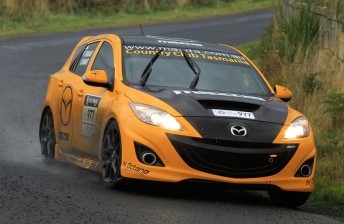 The Whites were thrilled with their event, despite the scare early on the last day.

“This is definitely the toughest Targa we’ve ever done,” White said.

“We had a misfire through Strahan and it was a bit un-nerving because we dropped a bit of time, but we thought it was more than it actually was.”

“So when we got to Mount Arrowsmith, we decided to go for broke. It was a pretty exciting stage and to get to the end and realise we’d cleaned it and pulled back 52 seconds got us back into our comfort zone. I think it was a record through Arrowsmith.

“This is a really satisfying win because we’ve put a massive amount of work into this event with the course changes. Losing this year was not an option for us. We wanted to win at all costs.”

Broadbent has become the dominant classic driver of this era and was pleased to extend his record.

“It’s been undoubtedly the most difficult Targa that I’ve ever been in, absolutely exhausting.

“Targa is a challenge – every single one. Every time you enter, your past record in the event means nothing. There would be no guarantees if I came back next year that I’d even get in the top 10 – it’s that difficult now.”

Burnie driver Jamie Vandenberg finished just 16 seconds ahead of Dean Evans in Showroom 4WD, both in a Mitsubishi Lancer. Evans’ result was enough to secure him the CAMS series win for his class.