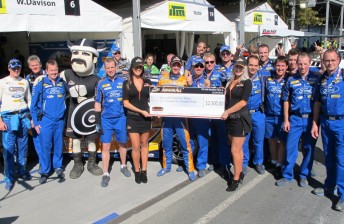 The FPR crew celebrate locking-out the front row in NZ

Ford Performance Racing duo Will Davison and Mark Winterbottom will share the front-row of the grid for Race 6 of the V8 Supercars Championship in Hamilton.

Both drivers set their fastest times in the final three minutes of the session, with Davison eclipsing his team-mate by just 0.01s.

Jamie Whincup ended the session third on the time sheets despite spending the last five minutes in the Turn 6 run-off area.

The TeamVodafone Commodore driver made significant right-front contact with the wall after losing control on the exit of the Turn 4 chicane.

The car is expected to be repaired in time for this afternoon’s race, which is scheduled to take place at 1505 local time.

Alexandre Premat’s Fujitsu Racing GRM Commodore returned to the circuit in qualifying after being repaired from its Race 5 accident overnight. The Frenchman will start at the tail of the field in 28th.