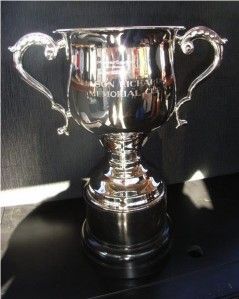 Jason Bargwanna has won the inaugural Jason Richards Memorial Trophy by taking overall honours in the NZV8s at the ITM400 Hamilton.

The Australian, who drive for Brad Jones Racing in last year’s V8 Supercars Championship while the now late Richards fought his battle with cancer, cruised to a comfortable victory in the third and final race today.

Alan McCarrison and Andrew Anderson completed the weekend podium, despite the latter suffering from a mechanical issue on the opening lap of Race 3.

Bargwanna and Anderson shared the victories in the opening two races. The former Bathurst winner led the pack to the chequered flag in Race 2 before a 10s post-race penalty dropped him to fifth in the final result.

The Hamilton event was a non-championship appearance for the NZV8s, with Angus Fogg having been crowned the 2011/12 champion at Taupo last month.

Fogg had an up and down weekend in Hamilton, but finished on a high note with a second place finish in Race 3.

The flamboyant Kiwi celebrated the category’s final chance to race on the street circuit with a series of post-race burnouts.