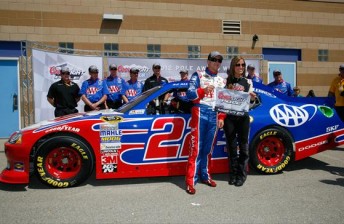 In winning the second Coors Light pole award of his career, his first since 2010 at Phoenix and his first since joining Penske Racing this season, Allmendinger edged Kevin Harvick (282.837 km/h) by .043 seconds at the 1.5-mile intermediate speedway.

Joey Logano, the first driver to make a qualifying run, was third fastest at 282.800 km/h but must start from the rear on Sunday because of an engine change during Friday’s practice session. Denny Hamlin, Logano’s teammate at Joe Gibbs Racing, claimed the fourth starting spot at 282.709 km/h, with Mark Martin (282.414 km/h) posting the fifth-fastest lap.

After finishing second at Martinsville to Ryan Newman in the sixth Cup race of the season, Allmendinger was gratified to continue the momentum for his No. 22 Penske Racing team.

“More than anything, I put so much pressure on my shoulders to go out there and perform,” Allmendinger said.

“They [his Penske team] are used to winning, running up front, getting poles. It’s good just to build momentum.

“So, hopefully, we have a solid 400 miles. It’s good, but we know the bigger picture’s on Sunday, and I’m happy to be part of the team.”

A tough session for the Fords, Sprint Cup points leader Greg Biffle qualified 17th at 281.162 km/h, the fastest of all the Blue Oval drivers, while Australia’s Marcos will start 28th.

“We’re trying hard to get a good race package in, but we’ll just have to wait until tomorrow to find out what we’ve got.”