Will Davison fastest in Race 5 qualifying

Will Davison fastest in Race 5 qualifying 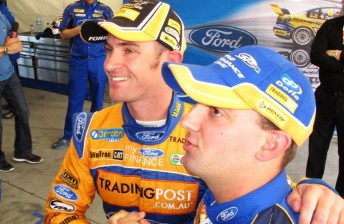 The Trading Post Falcon lapped the 3.4km circuit in a best time of 1:21.81s before spending the final minutes of the session in pitlane.

Winterbottom had looked set to jump to the top of the order inside the final five minutes. The Orrcon Steel backed driver had gone 0.14s quicker than his team-mate to the end of the second sector, before aborting the lap after a mistake on the final corner.

Shane van Gisbergen also had an exciting moment late in the session. The local hero locked his rear brakes and ran down the escape road at Turn 1, where he joined team-mate Lee Holdsworth, who had made a similar mistake immediately after setting his best time.