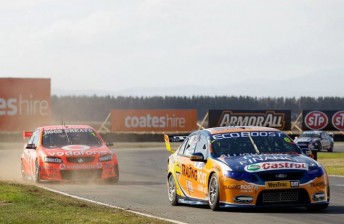 V8 Supercars is set to alter its engine regulations in order to stamp out elaborate fuel saving techniques currently being used by the category’s leading teams.

The prevalence of mixed compound tyre races this season has placed more emphasis on fuel economy than ever before, with teams benefitting greatly from being among the first to change from the hard to the soft tyre – a move largely dictated by the size of each car’s ‘fuel window’.

While last year’s introduction of a fuel trim switch enabling drivers to select between four pre-set fuel mixtures during races was intended to halt the development of more complex systems, several teams have stepped up their fuel saving programs this year and are understood to be varying mixture richness depending on where the engines are in their rev range.

This technique allows fuel to be saved under braking and on part-throttle while still providing full power when required, and is being achieved through manipulating fuel pressure or supply, most commonly by switching between different fuel regulators or intermittently turning fuel pumps on and off.

TeamVodafone and Ford Performance Racing have both suffered from mysterious engine problems already this year, with Jamie Whincup’s car developing a misfire on Sunday in Adelaide, and the factory Ford squad having three of its cars shutdown during their final pitstops on Sunday in Tasmania.

Concerns within the paddock that the fuel saving procedures are reducing engine component life and thereby increasing costs have grown in recent weeks, leading to the engagement of the category’s Engine Technical Advisory Panel.

The panel, which includes representatives from every engine supplier in the field, is currently in the process of refining potential regulatory solutions, with rule changes expected to be implemented over the coming races.

According to Ken McNamara, whose company KRE Race Engines supplies TeamVodafone, Tekno Autosports and Lucas Dumbrell Motorsport, the teams throughout pitlane are united in their desire for change.

“It can make for better racing having the fuel economy battle and you’ve got to allow a little bit of it, but if you don’t have limits people just keep pushing and pushing,” McNamara told Speedcafe.com.

“It’s pretty clear that something needs to be done to keep the engine costs in check. We’ve got a few ideas in the pipeline and I’m confident that together we’ll come up with the right solution.”

Speedcafe.com understands that the regulation changes will focus on ensuring the cars run a more consistent fuel pressure, and are likely to include a tightening of the window in which the fuel trim switch positions are able to be set.

Race 5 of the 2012 V8 Supercars Championship will take place today at the ITM400 Hamilton in New Zealand.