Jason White has continued to pull away from his rivals as the Targa Tasmania action played out in testing conditions in the North West of the state on the penultimate day of the five-day motoring enduro.

In the modern competition, White, in his Lamborghini Gallardo, remains the man to catch with just one day to go, building on his overnight lead across the monster 165 competitive kilometres that took the field from Strahan to Ulverstone and back.

On the morning stages White conceded a little time to Tony Quinn’s Nissan GT-R and Matt Close’s Audi TT RS. But by the afternoon, White was back setting the pace, extending his lead out to two minutes 15 seconds from Quinn, while Close’s hope of Targa glory ended when he crashed out of the event on the long Rianna stage. 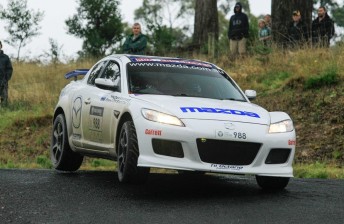 Brendan Reeves has moved back up to third overall

In Classic Outright, the old master in his 1974 Porsche 911, Rex Broadbent, was out having another field day. While Jon Siddins won two stages before lunch in his 1970 Datsun 240Z, Broadbent was enjoying trouble free motoring. He has a two minute 34 second lead and his sights set on a sixth straight class victory.

Simon Evans in Showroom had also seen his major opposition crash out, with Gavin James ending his run in the Renault on the Mt Roland stage. The Mazda3 MPS driver looks to also have victory within his grasp. Even with 135 kilometres remaining on the run to the finish line at Hobart’s Wrest Point on Sunday, his victory looks assured with a 19-minute buffer. Weather and road conditions again challenged the field on the longest day in Targa history, but White was able to thrive where many struggled.

“Our day’s been great, no worries whatsoever. We took it a bit easy in the fog over Mt Roland, but apart from that we’ve been pushing on well, so we’re really happy with the result so far,” said White.

“It all feels good and nothing seems to be giving us any worries with the car, so fingers crossed.

“It’s unfortunate that Matt (Close) crashed as he was only five seconds off taking second place from Tony Quinn, but he just got caught out with a road surface change.

“They’re okay, but the car’s not real good though, but it’s a testament to all the safety devices that we run in the cars.”

In the handicap classes, Jon Siddins leads Early Classic and Broadbent is the man to beat in Late Classic as well.

Winners are expected at the finish line at Wrest Point around 4pm Sunday.

Check out the video highlights from the day