Garth Tander has taken pole position for Race 5 of the V8 Supercars Championship at the ITM400 Hamilton.

Tander was the eighth driver on the circuit in the Top 10 Shootout, and managed to eclipse Shane van Gisbergen’s previous benchmark by just 0.04s.

The Holden Racing Team Commodore touched the walls at the exit of Turns 1 and 6 before stopping the clocks at 1:22.40s.

Van Gisbergen will share the front-row with Tander after the final two runners Craig Lowndes and Will Davison both made mistakes on their laps.

Lowndes found himself with significant rear locking at both Turns 1 and 2 and will start eighth, while Davison fared just two positions better after enduring an oversteer moment at Turn 3. 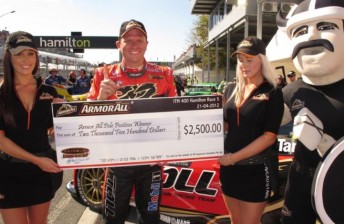 Garth Tander with the Armor All Pole Award

Both Moffat and Winterbottom triggered the electronic sensor in the Turn 4 chicane during their laps. The Orrcon Steel FPR Falcon driver decided to abort his lap entirely after the breach.

The 200km race will see each car required to use both the soft and hard compound tyres.

See below for the combined qualifying and Top 10 Shootout result