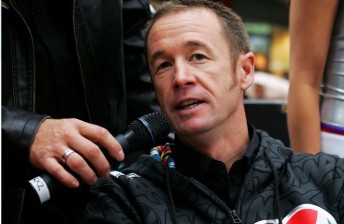 Greg Murphy, David Reynolds and James Moffat have all found Hamilton’s unforgiving concrete walls in separate incidents during the second practice session of the day at the ITM400.

The Pepsi Max Crew Commodore received damage to both of its front corners after clipping the inside wall at Turn 8. The contact shot Murphy into the outside tyre barrier, bringing out the red flags.

The local hero was eventually able to drive his car back to the pits after being removed from the barrier by marshals.

Reynolds meanwhile broke the left-front upright in his The Bottle-O Racing Falcon by clipping the inside wall in the left-hand kink between Turn 6 and 7 just prior to Murphy’s crash.

James Moffat’s incident had occurred in the opening minutes, with the right-hand side of the Team Norton DJR Falcon rubbing the wall at the exit of the Turn 4 chicane. The car did not return to the track for the remainder of the session.

The session featured two red flag periods, with the inside kerbing at Turn 8 requiring attention after 10 minutes.

D’Alberto used the small window of opportunity to remove Reynolds from the top of the time sheets, while there were no significant improvers in the final 90s of green flag action at the end of the session.

The full field will take to the track for the first time this weekend when Practice 3 gets underway at 1345 local time.