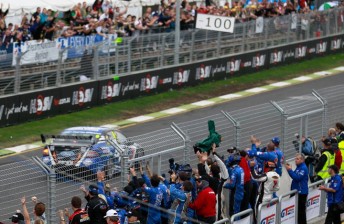 Champion V8 Supercars team owner Ross Stone has urged local race fans to support the final running of the ITM400 Hamilton this weekend amid uncertainty over the future of the class in New Zealand.

This year marks the fifth and last time that the Hamilton street circuit will be used, with V8 Supercars and the Hamilton City Council having last year come to an agreement to abandon the economically unviable race one year ahead of schedule.

The category’s future in New Zealand now appears to depend on the Auckland City Council accepting V8 Supercars’ proposal for a publically-funded redevelopment of Pukekohe International Raceway, which previously hosted the championship between 2001 and 2007.

“I think it’s sad to see the Hamilton event come to an end,” Stone told Speedcafe.com on the eve of the final ITM400.

“The first time I ever walked into the circuit I thought ‘gosh, the Kiwis have done a really great job here’. It was a bit special I thought the way they’d done it, the way they’d set the place out so immaculately.

“It’s probably been a tough time of the year weather wise to run it, but it looks like the weather this year will be perfect. Hopefully the local fans come out to support the final event and show just how much passion for V8 racing there is in this country.”

Stone, who co-owns SBR with brother Jim Stone, says he’s uncomfortable with the thought of  New Zealand missing out on a round of the V8 Supercars Championship.

“I think it’s vital for V8 racing as a business and as a sport that we race here in New Zealand,” said Stone.

“I hope it can all get sorted out and I’m sure it will, but until it is then I’m a bit nervous I guess.

“It’s certainly important to SBR – I still travel on a New Zealand passport and we’ve got a lot of Kiwis on the team – but I think it’s just so important for the V8 Supercar business to race in front of the New Zealand fans.”

Last year’s Hamilton event will be long remembered as one of SBR’s finest moments, with the team’s 21-year-old Kiwi driver Shane van Gisbergen breaking through for his maiden victory. The result marked the first time in 11 attempts that SBR had walked away from a weekend in New Zealand with the major prize.

“It was great to do it last year here – it was a really special moment for both Jimmy and I,” reflected Stone.

“It’d been so frustrating for us over here because there were times at Pukekohe where we should have won the weekend and we didn’t.

“The hard thing now is going to be doing it again this year. I think we’ve done the hard work and everything’s heading in the right direction. I’m not making any predictions, but I’m sure we’ll be in the mix.”

The V8 Supercars will take to the track for four practice sessions today, with the first set to get underway at 1040 local time.