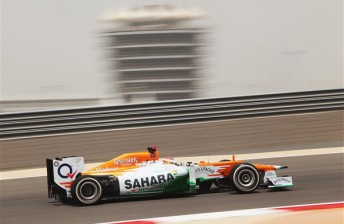 Force India has threatened to withdraw from Free Practice 2

Lewis Hamilton has topped Practice 1 at the Sakhir circuit, but Force India has stolen the headlines, threatening to withdraw from Practice 2 due to safety concerns.

McLaren’s Hamilton topped the times in a low-key first session, edging out Red Bull’s Sebastian Vettel by 0.3s on a green and slippery track.

Force India’s duo were the only cars to complete a run on soft tyres, and have told Autosport.com that it is considering withdrawing, or completing only a portion of Free Practice 2, in the afternoon.

A number of the Force India team members were caught up in protest on Wednesday night, and deputy team principal Bob Fernley says it could use the practice session’s stage to conduct its own protest.

Fernley insists, though, that the team will compete in qualifying and the race.

The top 10 in the session was rounded out by Mercedes’ Michael Schumacher, Red Bull’s Mark Webber and Lotus team-mates Kimi Raikkonen and Romain Grosjean.