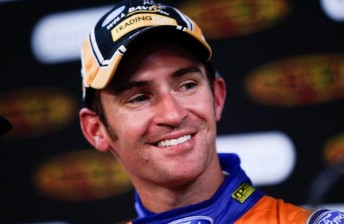 Will Davison has led a 1-2-3-4 for Ford Performance Racing Falcons in the penultimate practice session of the day at the ITM400.

FPR pilots traded the top spot for the majority of the 30 minutes, which ran green for its duration.

Davison’s time was marginally faster than the best set in Practice 2, despite being set on hard compound tyres.

There was drama late in the session for Lee Holdsworth, who damaged the front spoiler on his IRWIN Falcon by running through the final part of the Turn 4 chicane.

Michael Caruso had spun his Fujitsu Racing GRM Commodore moments earlier at the exit of Turn 4, but escaped without making contact with the wall.

Greg Murphy missed the session following his accident at Turn 8 in Practice 2. The front of the Pepsi Max Commodore sustained significant damage in the crash, with a replacement front crossmember required.

The team continues to work on the car ahead of the fourth and final practice session of the day, which is scheduled to begin at 1525 local time.