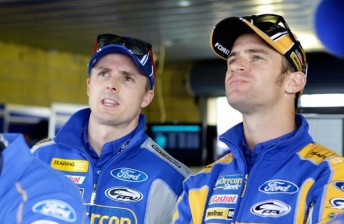 Ford Performance Racing has completed a busy day of practice for the V8 Supercars Championship in Hamilton by sweeping the top three places.

Teams began dipping into their weekend’s allocation of new soft tyres in the second half of the fourth and final 30 minute session, with Will Davison eventually emerging on top from Mark Winterbottom and David Reynolds.

Davison’s time of 1:21.79s proved a full second faster than the practice benchmark from last year.

Three-time and reigning champion Jamie Whincup was just 17th fastest in the session after failing to get a clean run on his soft tyres.

Greg Murphy’s Pepsi Max Commodore returned to the track in the final session after missing Practice 3 due to a crash earlier in the day.

The local hero completed 11 laps to end the session at the foot of the times.