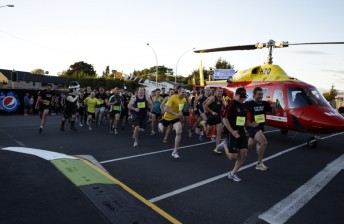 Pre-event set-up work has continued into the evening at New Zealand’s Hamilton street circuit ahead of tomorrow’s opening day of the ITM400.

Preparations for Ford Performance Racing, Brad Jones Racing and Walkinshaw Racing were thrown an unexpected curveball yesterday when flight delays saw the bulk of their respective crews not arrive at the circuit until this afternoon.

Thursdays festivities at the circuit included a late-afternoon fun run in aid of the event’s official charity, the Westpac Waikato Air Ambulance service.

The run took in a full lap of the 3.4km circuit, with the overall victory awarded to the first team to see all four of its members cross the finishing line.

Close to 100 members of the V8 Supercars community competed, while a strong contingent of locals also took part.

V8 Supercars says it hopes to organise a similar run at this year’s Sucrogen Townsville 400.