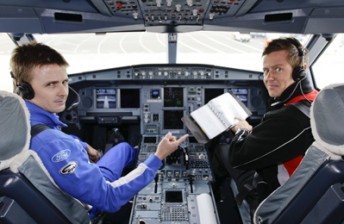 Is this the reason why the Virgin flight was delayed? FPR and HRT were delayed flying out of Melbourne yesterday

Ford Performance Racing, the Holden Racing Team and Brad Jones Racing were scheduled to fly out of Melbourne Airport at 10am yesterday morning, bound for New Zealand to compete in the ITM400 Hamilton.

Due to problems with the aircraft, the flight was delayed and eventually grounded.

Some of the passengers on the cancelled flight were able to catch a new flight at midnight, while others were instructed to go home and return this morning.

All passengers are now either in New Zealand or on their way.

Team owner Kim Jones says that the delay is an unnecessary frustration.

“It just puts everyone behind,” Jones told Speedcafe.com.

“We send an early crew to start setting up, but the way things are, everyone has a job. This just puts us behind.

“We’ve had guys sitting around the airport for 23 hours, and no one likes to do that. As it is, we’re busy enough at the moment.

“It’s not like we won’t be ready for the weekend, it’s just a major inconvenience. When the boys touch down, instead of having a full day to prepare, they’ll only have an afternoon and an evening.”

The ITM400 Hamilton kicks off tomorrow.