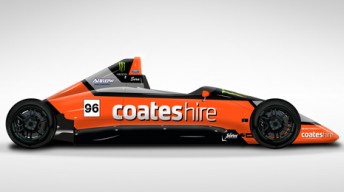 Sera, 23, will drive for Minda Motorsports in a Coates Hire-backed Mygale in the second round of the Victorian Formula Ford Championship.

It will be the first in seven Formula Ford events he will compete in this year, which will include three National-level rounds.

And Sera is in for a daunting debut, suiting up against a field of over 40 state entries at Phillip Island.

After winning 12 Australian karting championships and 44 state titles, Sera has elected to swap his rib protector for a HANS device and is looking forward to his Formula Ford debut.

“It’s a whole new ball game – gears, shocks, suspension, things that I’m not used to in karting. However, the fundamentals of race craft and race lines come naturally from karting.

“I’ll just have to work with the engineers and team-mates to help fast track my progression.”

Sera hopes that this will be his one and only year in Formula Ford, aiming to fast track his learning through the state series and progress into the V8 Supercars Development Series in 2013.

“I really want to be in the Development Series next year,” he said.

“So I’ll do seven rounds of Formula Ford this year, and if all goes well and the guys from Coates Hire and Monster are happy, we’ll look at stepping it up into V8 Supercars.”

CLICK HERE for more with Sera in this week’s edition of Cafe Chat.