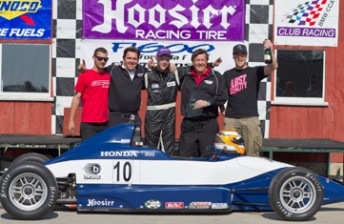 Australia's own Spectrum chassis on the podium at Virginia International Raceway

Spectrum has tasted its maiden win in the United States of America.

The success marks the first win for Spectrum in the USA, and means that the Australian constructor has now won races in three countries (Australia, UK and USA).

The win comes less than a fortnight after Spectrum driver Shae Davies recorded his first win in the Australian Formula Ford Championship at Tasmania’s Symmons Plains Raceway – the first win for the new Spectrum 014 chassis.

Driving his Spectrum-Honda for Cape Motorsports with Wayne Taylor Racing, Köykkä qualified on pole, won the first race but was eliminated from Sunday’s race after contact with Bryan Herta Autosport driver Garett Grist.

Regardless, Köykkä was happy to give Spectrum its first race win on American soil.

“That was some serious racing and this was a brilliant car,” said Köykkä.

“It‟s a shame we got taken out from the lead (of Sunday’s race). We were looking so good, but otherwise, it was a great weekend.”