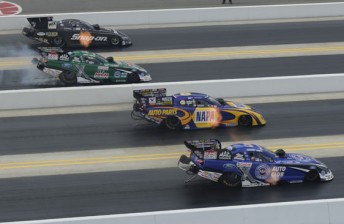 Hight came up against a quality field in the annual four wide event at Z-MAX Dragway in Charlotte – it included the boss – John Force, Ron Capps and Cruz Pedregon.

Spencer Massey continued the dominant theme in Top Fuel, taking his third victory from five races and advancing past Antron Brown to take the points lead.

Massey overcame a final field that included Tony Schumacher, Doug Kalitta and former points leader, Brown. Australian David Grubnic made it into the field and was eliminated in the second round of eliminations. This was the second NHRA Four-Wide Nationals win for Anderson, who calls Charlotte home for himself and his race team.

“I am off to a good start this year. I’ve been in three finals, and leading the points. I have a great race car, and Jason has a great race car. The Summit team is on fire. These are two of the very best cars we’ve had,” said Anderson.