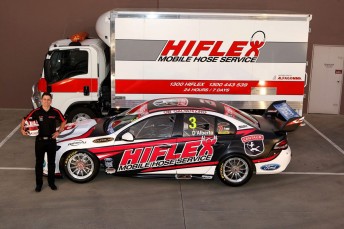 Tony D’Alberto will compete with major backing from HIFLEX Mobile Hose Service for the remaining events in the 2012 V8 Supercars Championship.

After joining the team as the windscreen sponsor in March, HIFLEX Mobile Hose Service upped the ante, taking position on the doors and front and rear bar of the #3 Ford Falcon FG.

The deal with HIFLEX Mobile Hose Service will be launched at this weekend’s ITM400 Hamilton – the last V8 Supercars race on the New Zealand street circuit.

HIFLEX is the mobile supply and service division of Alfagomma Australia – a privately-owned world leader in the development of hose, fittings and assembly systems.

D’Alberto is pleased to have new support for the balance of 2012.

“It is certainly great for us to HIFLEX as a major sponsor involved with our team for the remainder of 2012,” said D’Alberto.

“The new deal gives the team the same look and feel for the rest of the season and are looking forward to showing them what V8 Supercars is all about.

“I’ve had some good results at Hamilton in the past and we’re pretty confident that we’ll be in a competitive position this weekend.”

The ITM400 Hamilton kicks off this Friday with practice. A qualifying and 200km race will be held on Saturday and Sunday.