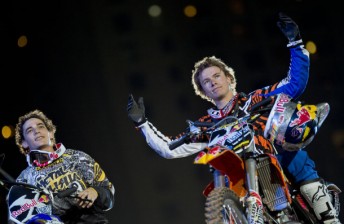 Australasian competitors have dominated the opening round of the 2012 Red Bull X-Fighters Freestyle Motocross Championship on the sands of Jumeirah Beach in Dubai, New Zealand’s Levi Sherwood defeating Aussie, Rob Adelberg in the Final.

In front of 20,000 people, the opening round of the six round, $1 million world tour saw Sherwood having to overcome West Australian, Josh Sheehan in the semi-finals, whilst Adelberg defeated Chilean Javier Villegas.

Australia’s Robbie Maddison did not compete at the opening round due to undergoing surgery some weeks ago. He isn’t out of the running to win the Series, with a ‘drop your worst round’ system in play.

Defending Red Bull X-Fighters World Champion Dany Torres of Spain and Norway’s Andre Villa, a leading title contender, were both knocked out in the quarter-finals, finishing eighth and fifth, respectively. Villa had earlier wept with tears of joy after taking second in Qualifying, overcome with emotions that he was able to ride well again after suffering a leg injury last season. 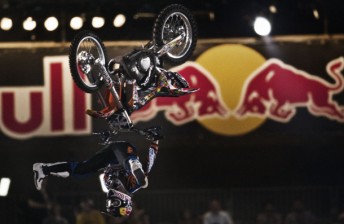 The next round will be conducted at Glen Helen in California on May 12.

CLICK HERE TO VIEW THE HIGHLIGHTS FROM RED BULL X-FIGHTERS ROUND 1 IN DUBAI.