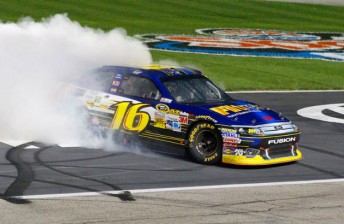 Sprint Cup Series points leader Greg Biffle has finally put a win on the board, cruising to victory over Jimmie Johnson in the Samsung Mobile 500 at Texas Motor Speedway.

Biffle took the lead on Lap 304 of 334 and pulled away to win his first race since Kansas in October 2010, beating Johnson, who was the race’s dominant figure, leading a race-high 156 laps.

Biffle said he was delighted with his first win in 18 months.

“I tell you what, these guys did a great job in the pits and adjusting on the car all day,” Biffle said.

“I can’t thank everybody enough for sticking behind the 3M 16 car. The fans that have supported us all the way. It is so exciting to get Ford and 3M and everybody that has been such a supporter back here to victory lane.”

Australian Marcos Ambrose led his first laps for the 2012 season, and enjoyed a competitive run. He sat in fourth place when he stalled in pit road, but still could have been in line for a top 10 finish until he ran out of fuel in the closing stages. Ambrose was classified 20th.