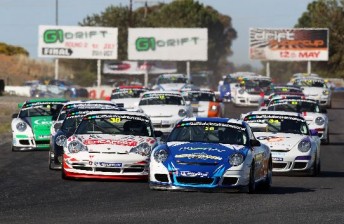 Modystach heads the field into Turn 1

John Modystach has produced an impressive performance to win all three races at the opening round of the 2012 Porsche Staff Solutions International GT3 Cup Challenge Australia series at Mallala.

Kane Rose, driving the sole Porsche Type 996 in the field, finished second for the round after adding two second place finishes to the fourth place earned on Saturday.

Series rookie Michael Almold completed the outright podium, with the pole-sitter taking an eighth, a fifth and a third in the three races.

Modystach paid tribute to his team after the combination’s dominant performance.

“The McElrea Racing guys have really pushed me along and we’ve been working at a lot of things. I’ve also had some driver coaching from Jonny Reid, which has helped immensely,” said Modystach.

“I think it will be tough to continue this form. Phillip Island is not my best circuit and there are a lot of Victorians in this series. Winton is new for a lot of us, which will be good. But hopefully I have the upper hand again when we get to our home track – Queensland Raceway.” The Southern Star Windows V8 Commodore Cup Series completed the second round of its season as part of the Shannons Nationals action at Mallala, with two-time defending title holder Adam Beechey winning all three races.

Beechey fought to win the second reverse grid race from the rear of the field, with even a mid-race spin failing to end the Donut King Commodore’s winning streak.

Chris Stevenson was second for the weekend despite several offs in the final race, while Ross McGregor, Jordan Symes, Anthony Tancredi and Michael Tancredi rounded out the six car field.

In the Dial Before You Dig Australian Saloon Car Series it was Simon Tabinor who walked away with the round win after emerging victorious in races two and three.

Reece Murphy meanwhile claimed his maiden round win in the Hi-Tec Oils Australian Suzuki Swift Racing Series after taking out both of Sunday’s races.

The third round of Shannons Nationals presented by Hi-Tec Oils will be held at the Phillip Island Grand Prix Circuit on the May 25-27 weekend.