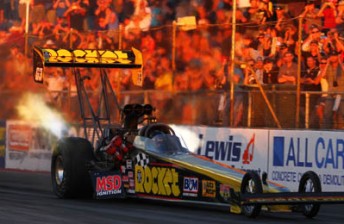 Sydney-sider, Andrew Cowin’s charge for an ANDRA Pro Series Top Fuel Championship is well on track after taking the Rocket Industries Top Fueller to the number one spot in qualifying for the historic return of professional drag racing to Adelaide.

He and Mildura’s Phil Lamattina traded blows during the qualifying session, bettering each other’s time with every run.

Lamattina first snuck ahead with a 4.400sec in the third session bettering Cowin’s day one 4.405sec. In the final session Cowin charged through with a 4.37sec seizing top spot after an amazing drive job.

“We just slid it down there this run and were really careful with it. I knew the 4.40sec run last night wasn’t going to stand,” he said. “It got a little bit loose, it put a cylinder out and it pushed me back to one side. I got it back into the middle and sort of held it, even if we took the long way down.

“The track is going to be a lot hotter tomorrow so we need to get the car down the track on our bye run in the first round and get some more data for the semi finals.”

Debbie O’Rourke was the top qualifier in Top Alcohol with a 4.92sec pass.
“It’s pretty humbling to be where we are in a class field. The crew have been working really hard and Grant has been making some really good calls,” she said. “It would have been quicker but we broke an exhaust rocker during the pass.

“This weekend I have managed to hit all the shift points so from a driving perspective it is a good experience. The crowd took me back to the nineties and you remember why you started racing in the first place.”

Top Bike’s dominant rider Chris Matheson could not improve on his Friday time which continued to lead the charts. His third qualifying session suffered a hiccup when he knocked his foot on a timing box, leading him to put it on ice during the evening.

“It took off alright and a bit further down track it stepped out and spat me out into the other lane, it was pretty ugly in the braking area,” he said.

“We are going to try and find the limit on the last qualifying pass so we will put a bit more horsepower back in.”

Phil Howard may be top qualifier in Pro Stock Motorcycle but he faces a sleepless night after coming off his motorcycle after a run at over 250kmh.
The damage to both bike and rider are relatively minor but Howard needs to replace a front tyre, repair bent handlebars and fix the carbon fibre body to get back on to the track for the first round confrontation against national champion Maurice Allen.

“The bike came down a little crossed up and I got on the front brake and it locked up and washed out,” he said. “I tried to keep it up but it side swiped the wall and that was it. It’s fixable, it’s just on a time slot.”